Atomic spectroscopy is the technique for determining the elemental composition of an analyte by its electromagnetic or mass spectrum. Several atomic spectroscopy analytical techniques are available and selecting the most appropriate one is the key to achieving accurate, reliable, real-world results. This article focuses on ICP-MS.

An inductively coupled plasma mass spectrometer is an analytical tool capable of measuring very low levels of about 72 different elements. Most of these elements have limits of detection below the part-per-trillion range with some even in the parts-per-quadrillion range.

Samples are introduced into an argon plasma as an aerosol. The plasma dries this aerosol, dissociates the molecules, and then removes an electron from the components. This forms singly charged ions which are then directed into the mass spectrometer (MS).

The MS is effectively a filtering device and only one mass-to-charge ratio will be allowed to pass through at any given time. After passing through the MS the ions strike an electron multiplier detector. The impact of the ions releases an electron cascade, which is amplified until it becomes a measurable signal. The software compares the intensities of the measured signals to those from known calibrated standards to determine the concentration of the element.

Any ICP-MS consists of the following components: 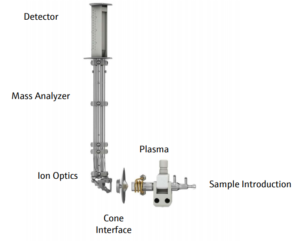 Each type of nebulizer will optimally improve the introduction of specific sample types leading to the best performance of the ICP-MS. Once the fine droplets are created, they will pass through a spray chamber before entering the plasma. Again, the spray chamber chosen will be the most suitable for the sample and application.

The aim of the nebuliser and spray chamber choice and configuration is to ensure that consistently uniform droplets form the aerosol, which then enters the torch. 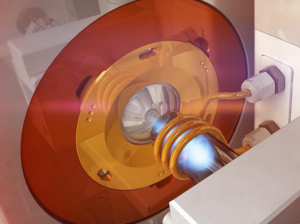 The plasma is generated by passing argon gas through a series of concentric quartz tubes (the torch) that are enclosed at one end within a radio frequency (RF) coil. Energy is supplied to the coil by the RF generator, usually at a frequency of 27 MHz, and this couples with the argon to produce the plasma. By controlling and altering the power of the plasma it is possible to handle a wide variety of sample matrices including organic solvents.

The aerosol droplets, which still contain the sample matrix and the elements to be determined, pass through this 6000oC zone and are first dried to a solid and then heated to a gas. The atoms then absorb more energy and will eventually release one electron to form singly charged ions. The singly charged ions then pass through the plasma and enter the interface region and vacuum system.

Interferences in ICP-MS are caused when ions generated have the same mass-to-charge ratio that is identical to that of the analyte ion. Common sources are the plasma, the sample, or a combination of the two. Some common interferences are

In the case of iron at mass 56 the iCRC (collision/reaction) cell can introduce He gas into the cell, which is physically bigger than the iron ion. The interfering ion will collide more often than the Fe with the helium atoms and loses kinetic energy with each collision. There is an energy barrier at the cell exit and it is set to allow only higher-energy ions can pass. So, in this case the ArO interferent is removed. This is known as Kinetic Energy Discrimination.

We can also operate in Reaction mode; here we use hydrogen in the cell and the hydrogen will react with the interfering ion causing it to increase its mass by 1 amu. This mass will not be allowed through the MS. The ArCl interference when measuring Ar at mass 75 can be removed by this approach, for example.

If there is no interference (some masses don’t have interfering ions or the matrix is very clean) then the cell is, effectively, empty and we can run in a ‘no-gas’ mode.

The ion beam is bent through 900 by the ion optics and the unwanted neutrals and photons pass straight through and are removed by the vacuum system.

One problem is that as the ion beam moves through the ICP-MS from the interface region to the MS it is continually diverging and less ions will get through to the detector. All designs try to compensate for this but the more effective create a 3D electrostatic field that can be very finely tuned and focussed for the masses being analysed within each sample. 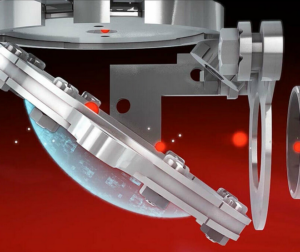 So, although an ICP-MS is, in fact, measuring sequentially mass after mass, the quadrupole is capable of scanning at a rate more than 5000 atomic mass units (amu) per second. This enables the ICP-MS to measure many different elements very quickly even though only one mass passes through the quad at any one time.

Some detectors use a dual mode, which includes both digital and analog modes, but it is now accepted that digital-only detectors are more efficient, reliable and have a longer lifetime. Detectors used in commercial instruments are capable of a wide dynamic range so ICP-MS instruments can still measure at both high concentration levels as well as extremely low levels.

Where are ICP-MS instruments used?

ICP-MS instruments are relatively expensive to purchase and run. Depending on the final configuration a typical system would be around £120,000 to buy and will cost a few thousand pounds a year to run. So, instruments are bought where there is either a regulatory requirement to measure very low levels of certain elements or a specific research interest for an element.

Some of the larger markets for ICP-MS are

Some of the more specific markets for ICP-MS are

Since ICP-MS instruments measure specific isotopes of an element, the ratio of two or more isotopes can readily be determined. In isotope dilution, the sample is spiked with an enriched isotope of the element of interest. The enriched isotope acts as both a calibration standard and an internal standard. Because the enriched isotope has the same chemical and physical properties as the analyte element, it is the best possible internal standard. For this reason, isotope dilution is recognized as being the most accurate type of all analyses and is often used to certify standard reference materials.

Isotope-ratio determinations are used in a variety of applications, including geological dating of rocks, nuclear applications, determining the source of a contaminant, and biological tracer studies.

If very low levels of detection are needed or there is a large sample throughput required, then ICP-MS may be you best possible solution.

For further information please use this link https://www.scimed.co.uk/product-category/icp-ms/